Share a memory
Obituary & Services
Tribute Wall
Read more about the life story of Anita and share your memory.

For the past several months, she was convalescing at Greenbriar Nursing Home, after a full life as wife, mother and daughter. Her love of life was John G. Vogrin Sr., her husband of almost 60 years. Her two sons were her pride and joy. And the accomplishments of her grandchildren and great-grandchildren made her smile.

Her life began on Feb. 19, 1926, in the Brier Hill neighborhood of Youngstown, the daughter of Guy Louis (Polon) Palumbaro and his wife, Grace Galose Palumbaro.

In her early life, she lived in a large house on Dearborn Street, growing up with her five older siblings and extended Italian-American family. Her parents were immigrants, but they both loved America and made sure their children were encultured into that way of life. A rule of the household was to speak in English.

After learning reading, writing and arithmetic at Tod Elementary and Hayes Junior High, Anita graduated in 1944 from The Rayen School, where she enjoyed her history lessons but not many other subjects. She also enjoyed dancing, taking tap lessons as a child. She often told her children about aspirations of becoming part of the famed Rockettes at Radio City Music Hall in New York City, but because of her short stature, she was convinced she could never make the cut.

Before getting married, she often talked about her jobs in the workplace, including as secretary for Teamsters Local 377 and at the old Lordstown Depot. She also worked at the Lustig shoe store in downtown Youngstown.

But she had no career aspirations. Instead, she made a life taking care of her parents and setting up the home with John, whom she married Feb. 7, 1948.

A Catholic by faith, Anita had intense religious devotion to the Blessed Mother, making annual trips to a shrine in Carey, Ohio, which she credited for the healing of a childhood rash. She belonged to Holy Apostles Parish and the Croatian Home Lodge 66 of Youngstown, where she worked for a while in the 1980s at the Friday fish fry’s.

After her parents died in the early 1970s, Anita and John moved to the west side of Youngstown, where they lived until John's death in November 2007. In her later years, Anita lived in Boardman.

As pastimes, she loved to listen to music of all genres, going out dancing or out to eat and gambling, especially those trips to the race track and casinos. John and Anita often said the highlight of their lives were their trips to Las Vegas, with three of them being on cross-country driving excursions. She also enjoyed watching sports on television, especially football, tennis, golf and her favorite, the Cleveland Indians.

She also was preceded in death by two brothers, Michael "Bobby" and Dominic "Ted" Polon; three sisters, Jennie Scavnicky, Phyllis Stelluto and Mary Carelly; and a host of brothers- and sisters-in law.

In lieu of flowers, memorial tributes may be made to Sanctuary Hospice.

To send flowers to the family or plant a tree in memory of Anita A. Vogrin, please visit our floral store. 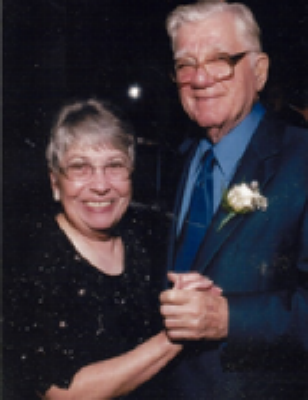